Nicholas Woodman (38), the founder of Woodman labs and ultimately the inventor of the GoPro camera is a self-made billionaire (not a typo, that is a B). After the company started trading publicly on stock markets last week it is now valued at over $2.6 billion. Read Story.

So how did a surfer turned entrepreneur strike it rich? Woodman – an adventure junkie – currently lives a fabulous life but he had to work hard for it. Here’s what we were able to uncover and might help remove some myths about business and ultimately help lead to your success.

1) Starting a business does not result in overnight success. According to Woodman it was a “10 year overnight success”. Woodman first created the GoPro in 2002 and just now in 2014 was able to make a remarkable exit. Very rarely can someone just technically develop a product and sell for millions. It requires an application that has a need in the real world and market traction. The average founder of a company takes approximately 7 years to make an exit. Are you dedicated enough to work on your business that long?

2) Get into a Space You are Passionate About. Woodman was an avid surfer and overall adventurer. He got into an industry he was passionate about to execute his business mission in. To be in a business that long and put in the amount of hours an entrepreneur requires to be successful you have to combine work and pleasure by living and breathing in the industry. Essentially, work shouldn’t feel like work at all.

3) Start Learning About Business Early. When Woodman was in high school he started selling t-shirts to pay for his adventurous lifestyle and college. Learning the art of selling is the most important element for every business. If you do not feel comfortable or do not have the ability to sell, stop developing products and work for someone else unless you are willing to give up part of your company to bring a business partner on. Woodman learned how to sell early and the passion he had for his products transferred to customers resulting in sales.

4) Learn from Past Mistakes. In the late 90’s Woodman started his own video game company called FunBug and raised $4 million in Venture Capital. It like many other companies died during the dotcom crash. This is partly why with his next venture, he decided not to raise VC money at all to control the company and cash flow.

5) Get Funding from Mom and Dad. Entrepreneurship is a very human endeavour that puts people and their ideas out into the public eye. In Woodman’s case, he was fortunate enough to have parents to back his idea to the tune of $260,000 US. He is not alone from getting parents from relatives. According to our start-up research – relatives are the most common place companies obtain seed money from. It is important to have access to enough money to both develop a product and commercialize it so you can focus on your mission.

6) Listen First – Then Innovate. The classic problem many entrepreneurs have is that they develop a solution they think is out of this world but turns out they are the only one with that pain point or have no way of reaching others with a similar pain point. Or perhaps the problem they solve isn’t worth the price of the solution. By listening to the market first and speaking with prospective customers before developing a solution a lot of risk and excess cost can be eliminated.

7) Launch Cheap and Early with a Minimum Viable Product. Woodman’s first product was literally a waterproof camera with a strap that attached to his wrist. This was a very low tech product to enter the market where he could then learn about what the market needs and wants while he was building sales channels to capture market share before competitors could catch on. He even used himself on his packaging instead of a model to save money. 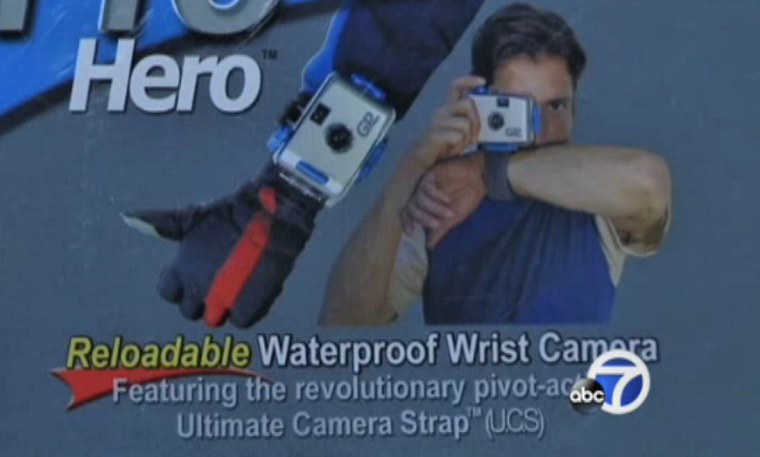 8) Go After a Niche Industry First. With the original GoPro Woodman targeting the surfing market first. Obviously a strap on camera could have gone in many different directions but he focused and tailored his product and messaging so he could be something to somebody in an industry vertical.

9) Don’t Be Affraid to Pivot. Clearly the camera that straps to someone’s wrist had a limited set of buyers and the technology partners were not quite there with Woodman so he had to create his own solution to solve customer problems. Woodman realized that not every camera was durable enough to go through an adventurous lifestyle hiking, climbing, underwater, etc. so he developed his own camera and mount for multiple applications so people could film anywhere.

GoPro now has over 500 employees and in 2013 did sales of $986 million. If you are interested in starting a business, come in and chat and we would be happy to share what we have learned from following all sorts of start-ups. We also have tonnes of tools, resources, and funding to help you get started.